The sun shone at CrimeFest, and so did the four German crime writers who had travelled from Berlin, Hamburg and Frankfurt to join us in Bristol for our panel ‘Krimi Time! The Best of German Crime Fiction’.

Oliver Bottini, Simone Buchholz, Dirk Kurbjuweit and Andreas Pflüger have produced an impressive array of crime novels between them, ranging from police procedurals to thrillers and noir. Our panel focused on the novels they’ve published in English – Bottini’s Zen and the Art of Murder (MacLehose), Buchholz’s Blue Night (Orenda), Kurbjuweit’s Fear (Orion) and Pflüger’s In the Dark (Head of Zeus) – and the authors each gave a short, tantalising reading from their works to a rapt audience. 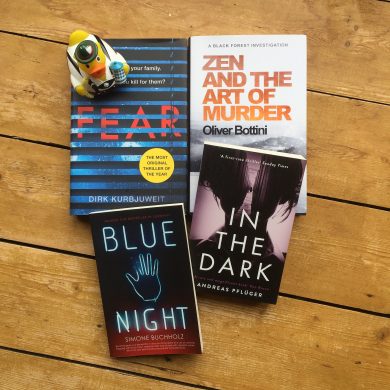 In the course of the panel discussion, we heard from Simone about the influence of German writer Jakob Arjouni and his Turkish-German PI Kemal Kayankaya on on her ‘Chastity Riley’ series, and about why the St. Pauli area in Hamburg, where Blue Night is set, is so much more than the city’s red-light district. Oliver talked about his rural Black Forest setting and its proximity to France, which is designed to reflect the German-French heritage of his policewoman Louise Boni, and why he decided to incorporate Buddhist philosophy into Zen and the Art of Murder. Andreas explained some of the reasons he choose to create Jenny Aaron, his blind lead protagonist – including the challenge this presented to him as a writer – and about why the Japanese Bushido code is so important to Jenny. Dirk related the real-life events behind his psychological thriller Fear – and explained how the law was able to offer only limited help in dealing with their family’s stalker, placing him in a difficult position as a husband and father keen to protect his family.

We were also very fortunate to have two of the authors’ translators with us in the audience – Jamie Bulloch, who translates Oliver’s ‘Black Forest Investigations’ series, and Astrid Freuler, who is currently translating the second of Andreas’ ‘Jenny Aaron’ series. Each of the authors spoke about the process of working with their translators (Rachel Ward and Imogen Taylor in the case of Simone and Dirk respectively) – and were keen to praise their skills and expertise. A recurring theme was the importance of communication between the author and the translator, who typically asks lots of detailed questions. Simone felt that these made her look afresh at the text, and she particularly enjoyed seeing her work in English, the ‘first language’ of noir.

Astrid with Andreas, and Oliver with Jamie. In both cases it was the first time the authors had met their translators! Jamie is holding the proof of A Summer of Murder, the second in the ‘Black Forest Investigations’ series.

To close the panel, I asked each of the authors to nominate one German crime writer/novel they would recommend to English-language readers. Their picks were as follows:

Each of the authors also appeared on a second panel, discussing topics such as disability, obsession, the figure of the villain, and ‘putting your characters through the mill’. Here are a few slightly grainy photos of them in action:

One lovely surprise over the weekend was the news that Oliver’s Zen and the Art of Murder had been longlisted for the CWA International Dagger Award – congratulations to Oliver, Jamie and MacLehose Press! Here’s the full list, which includes several crackers:

Finally, I had lots of fun wandering around CrimeFest giving away 14 German-language crime novels. Here are photos of a few happy recipients:

Richard, Abir, Alison and Janet with their free Krimis!

Huge thanks to the Goethe-Institut London for its generous support in bringing our German writers to CrimeFest. Many thanks also to the CrimeFest organisers, and Adrian Muller in particular for his help.