Guten Tag from Hamburg! Our first extract comes from… 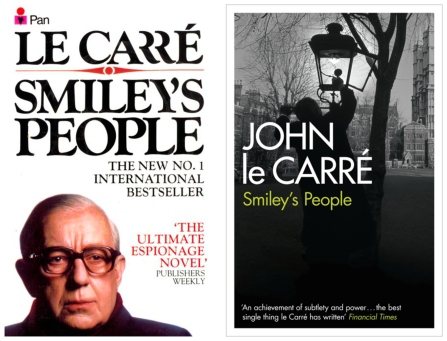 The extract is set at the height of the Cold War.

The second of the two events that brought George Smiley from his retirement occurred a few weeks after the first, in the early autumn of the same year: not in Paris at all, but in the once ancient, free, and Hanseatic city of Hamburg, now almost pounded to death by the thunder of its own prosperity; yet it remains true that nowhere does the summer fade more splendidly than along the gold and orange banks of the Alster, which nobody has yet drained or filled with concrete. George Smiley, needless to say, had seen nothing of its languorous autumn splendour. Smiley, on the day in question, was toiling obliviously, with whatever conviction he could muster, at his habitual desk in the London Library in St. James’s Square, with two spindly trees to look at through the sash-window of the reading room. The only link to Hamburg he might have pleaded – if he had afterwards attempted the connection, which he did not – was in the Parnassian field of German baroque poetry, for at the time he was composing a monograph on the bard Opitz, and trying loyally to distinguish true passion from the tiresome literary convention of the period.

The time in Hamburg was a few moments after eleven in the morning, and the footpath leading to the jetty was speckled with sunlight and dead leaves. A candescent haze hung over the flat water of the Aussenalster, and through it the spires of the Eastern bank were like green stains dabbed on the wet horizon. Along the shore, red squirrels scurried, foraging for the winter. But the slight and somewhat anarchistic-looking man standing on the jetty wearing a tracksuit and running shoes had neither eyes nor mind for them. His red-rimmed gaze was locked tensely upon the approaching steamer, his hollow face darkened by a two-day stubble. He carried a Hamburg newspaper under his left arm, and an eye as perceptive as George Smiley’s would have noticed at once that it was yesterday’s edition, not today’s.

Klaxon! le Carré’s new novel, A Legacy of Spies is out on 7 September. After 25 years, George Smiley is back!

We’ve had a wonderful couple of days in Hamburg, seeing family, friends and lots of sights. It really is a most beautiful place. A few highlights below…

View across the Aussenalster (Outer Alster), which is mentioned in the passage above and lies right in the middle of the city:

Here’s the kind of boat our young man was waiting for – these chug around the Alster like genteel water-taxis:

Here’s the front of the Rathaus or City Hall. We noticed that it was flying the Hamburg flag and the European flag, but not a German one. The city’s Hanseatic Free City status is one it is very proud of and likes to stress:

Here’s the back of the Rathaus. Rather splendid: 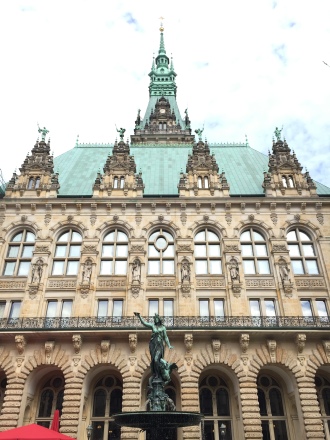 The German election is coming up later in September, so election posters are everywhere. Behind to the left, the offices of Die Zeit, the influential weekly broadsheet.

The Elbphilharmonie, a swish new concert hall and architectural wonder, has just opened. This is the way in (*hums stairway to heaven*). Hamburg locals have already nicknamed the building ‘Elphie’: 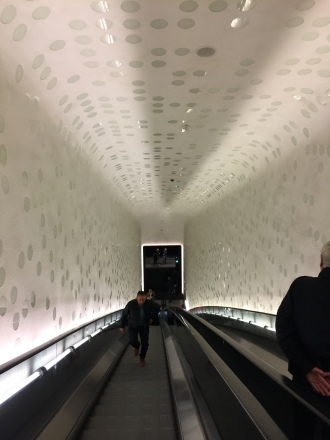 Lastly, the best souvenirs ever: an iconic Tatort key-ring and a book-bag (Lesestoff = reading matter). 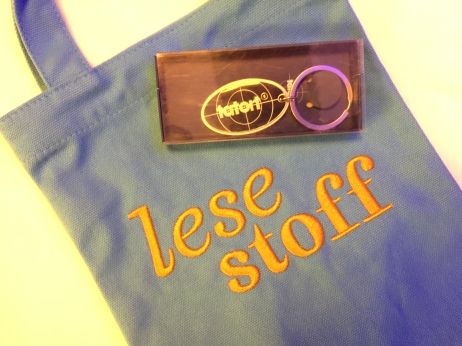 Click here for an overview of Mrs. Peabody’s Eurotour

I never thought I’d say this, but I was glad of some Welsh rain this afternoon, as it gave me and Mr. Peabody the perfect opportunity to go to the cinema. There, we treated ourselves to the 1970s espionage fest that is Tomas Alfredson’s Tinker Tailor Soldier Spy, adapted from the John le Carré classic of 1974.

The film has received rave reviews, including a rare 5 stars from The Guardian’s Peter Bradshaw, and I can understand why: this is film-making of the highest quality, which is beautifully acted and styled, and recreates a tense Cold War atmosphere to perfection.

Although the plot is fiendishly complex in places, with some mind-boggling twists and turns, the fundamentals of the story are always clear. There is a Soviet mole in the highest echelons of the British Secret Service, working for ‘Karla’, the enigmatic head of the KGB. It falls to George Smiley, a forcibly ‘retired’ senior intelligence officer, to flush the mole out. The spy has to be one of four people, all of whom Smiley has worked with for years, and so he is dealing not just with a political betrayal, but with a long-running personal betrayal as well.

The film allows Smiley’s investigation to unfold at a leisurely pace, as he tracks down the key players whose recollections will allow him to identify the mole. We are also shown Smiley’s own memories of past events (including a Christmas office party with Le Carré as an extra), which he is forced to view with new eyes – a painful process that reveals how one person’s betrayal has undermined all their supposed achievements down the years. Seeing things clearly is a dominant theme: early in the film, Smiley visits an optician’s and emerges with a new pair of glasses – the big, rectangular type worn by Alec Guinness’s Smiley in the 1970s TV adaptation. But this is much more than simple homage to the famous earlier series: the new glasses have a deeply symbolic function, showing how Smiley has sharpened his vision, in order to see the truth properly for the first time.

The acting is excellent throughout. Gary Oldman is a wonderfully controlled Smiley, whose close-ups reveal, through the minutest of facial movements, the tensions that lie beneath. There are also wonderful performances by John Hurt, Benedict Cumberbatch, Toby Jones, Colin Firth and Kathy Burke (who has possibly the best line of the whole film). Hats off, as well, to the film’s cinematographers, stylists, and lighting crew, who evoke a gloomy 70s Britain so perfectly: there’s no James Bond glitz or glamour here, just a succession of dark, windowless secret-service offices and hideouts, in a 1970s palette made up almost exclusively of browns (from beige to fawn to mud and a thousand shades in-between). The humdrum office life of the secret service is beautifully depicted (Trebor Mint, anyone?) and in some ways the whole story can be read as just mundane office-room politics, with various divisional heads pitted against one another for supremacy over the years … albeit with more geo-political issues and human lives at stake than your average workplace.

So how does a review of this seemingly ultra-British film end up on a transnational crime blog? Well, the film was co-funded by France’s StudioCanal, and the director, Tomas Alfredson, is Swedish. Best known for his 2008 vampire film Let the Right One In, Alfredson has done a tremendous job of adapting le Carré’s depiction of the classic Cold War crimes of treachery and betrayal. And in its understated style and underlying melancholia, I see this film connecting back to Swedish crime writers such as Sjowall & Wahloo and Henning Mankell, whose investigative figures, like Smiley, plod their way in a dogged and melancholy fashion towards the truth.

In Tinker Tailor Soldier Spy, the quintessential British espionage thriller meets the best of Swedish crime writing. It’s a winning combination and I can only hope that the other two novels in the Karla Trilogy will make it to the big screen via the same film-making team.

There’s also a lovely A-Z of TTSS from The Guardian available here.