The Goethe Institut/New Books in German crime fiction evening – ‘In the Library with the Lead Piping’ – took place in London last week and was a rip-roaring success. We had an audience of around fifty, who gamely took part in our murder mystery and listened with rapt attention to authors Mechtild Borrmann, Mario Giordano, Michael Ridpath and Louise Welsh as they read from and discussed their work. 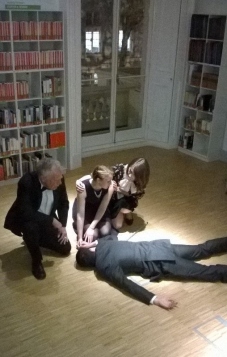 Who killed Macneath? The evening began with a murder in the library…

…before moving on to the readings and a discussion.

As moderator, I thoroughly enjoyed putting some juicy questions to the authors about their works…

We explored why British authors Michael and Louise chose to write novels set in Germany (Traitor’s Gate, The Bullet Trick and The Girl on the Stairs); the authors’ use of settings (from urban Berlin and small-town Germany to the island of Sicily); German regional crime and the Soziokrimi or social crime novel (the ‘Kleve’ series and Tatort); the use of crime fiction to celebrate plural cultural identities (Aunt Poldi); the role of transgressive women in German film and crime (Pandora‘s Box, The Girl on the Stairs, Aunt Poldi); the challenges of writing about the Nazi past (Traitor’s Gate, Silence) and on contemporary Iceland (‘Fire and Ice’ series). We also discussed whether the former East Germany could be the next big thing in historical crime fiction or whether it was still too early to focus on this era (the authors had differing views on this point). The audience put some great questions too, asking to what extent the authors worked together with their translators, whether or not they wrote with their future readers in mind, and the nature of Ingrid Noll’s influence on contemporary German crime writing (huge).

All in all, it was an excellent evening. Huge thanks to everyone who came along, and to Jens Boyer at the Goethe Institut London and Charlotte Ryland of New Books in German for organising such a fantastic event – Charlotte also did sterling work as a translator during the panel discussion!

We managed to interview each of the authors about their works ahead of the event – I’ll add some links to the podcasts here soon.

And here’s a good blog post by Alyson Coombes on one of Mechtild’s novels – The Other Half of Hope – which will hopefully be translated soon. 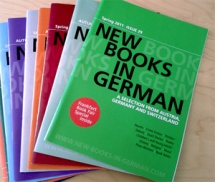 In other news, the final proofs of the Crime Fiction in German volume have just arrived from the University of Wales Press. All that remains to be done is the index, a job I enjoy as it always throws up entertaining entries. I’ll leave you to wonder how ‘Elvis Presley’, ‘Cagney and Lacey’ and ‘Dragnet‘ fit into the history of German-language crime writing!

Excitement is mounting, as ‘In the library with the lead piping’, a fabulous German crime fiction event at the Goethe Institut London, is now only a week away.

The event features two German authors – Mechtild Borrmann and Mario Giordano – and two British authors – Michael Ridpath and Louise Welsh (who’ve both written crime with a German twist). They will be reading from their works and taking part in a panel discussion (see this earlier post of mine for some author details).

As chair for the event, I’ve spent the last couple of weeks happily reading my way through the authors’ novels. What’s struck me most, aside from the quality of the works, is their wonderful diversity. Police procedurals, spy novels, psychological thrillers, historical crime novels and comedy crime fiction are all represented, with German settings and themes used in a variety of innovative ways. It’s going to be a fascinating evening!

If you’re in London on Tuesday 10. November and would like to come along, all you need to do grab a ticket via Eventbrite. Entry is FREE.

Further details of the event are available on the Goethe Institut website.

Watch out for some teaser tweets on Twitter. Our hashtag is #GoetheKrimi.