If you’re based in the UK and fancy watching some top-notch international crime drama over the weekend, then I have a recommendation for you. Mystery Road is a fantastic Australian six-parter that’s currently available on BBC i-Player (though be warned that the first two episodes will only be around until Monday).

Mystery Road is set in a tiny, arid dot of a town called Patterson in north-western Australia. The opening episode shows two workers from the sprawling Ballantyne Station discovering an abandoned truck in the middle of the outback. Its driver, their co-worker Marley Thompson, has disappeared without trace.

Local Senior Sergeant Emma James (Judy Davis) calls in detective Jay Swan (Aaron Pedersen) to help her solve the case, but soon wishes she hadn’t, as she finds some of his working methods and lack of communication difficult to deal with. They form an uneasy alliance, and as the investigation unfolds, we see not only how Marley’s disappearance impacts on his family and the wider community, but how past events and long-held secrets have a bearing on what’s taking place.

I have a real soft spot for Australian crime drama – The Code and Deep Water are particular favourites. But both of those had a quite edgy, urban, high-tech feel, whereas Mystery Road takes us right out of the city and channels the American Western (the classic maverick investigator with his stetson and gun riding out into wild country).

What Mystery Road also gives us is a proper, nuanced depiction of an Aboriginal community. There are at least eight prominent characters with Aboriginal backgrounds – including lead investigator Jay Swan, and this gives the series a markedly different viewpoint to other Australian crime dramas I’ve seen. We’re shown how Marley’s disappearance impacts on his brother Cedric and mother Kerry (Deborah Mailman), and on his friend Shivorne Shields (Tasia Zalar), but also how Swan’s status as a policeman makes life both easier and harder for him when trying to glean information from the tight-knit community. 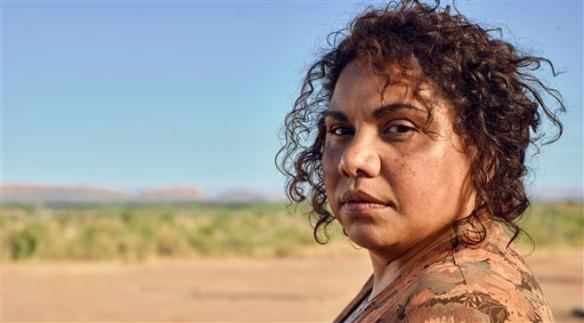 The other thing I LOVE about this series is its stunning cinematography, which has a stylish earth-from-the-air feel. The red, brown and ochre tones of the desolate desert landscape, and the sheer scale of the land are beautifully communicated to the viewer. Hats off to director Rachel Perkins, cinematographer Mark Wareham and art director Loretta Cosgrove.

One of the fabulous overhead shots from the series.

I haven’t yet watched the whole of Mystery Road, but am finding its measured pace, nuanced characterisation and depiction of small-town life extremely satisfying. In addition, the great acting by a number of Australian luminaries and wonderful visuals make this the perfect weekend treat.

First line: Even those who didn’t darken the door of the church from one Christmas to the next could tell there would be more mourners than seats.

If you haven’t read The Dry yet, then drop everything. I’d heard on the grapevine that this Australian debut was fantastic, and following a reminder from my mum (who likes to read The Times crime recommendations down the phone to me), finally managed to get hold of it.

The Dry is set in Kiewarra, a small farming community a few hours from Melbourne in south-eastern Australia, which for the past two years has experienced a horrendous drought and sustained financial pressure. However, the community is still stunned when Luke Hadler, a respected local farmer, kills his wife Karen and six-year-old son Billy, before turning the shotgun on himself. The lone survivor of the murder-suicide is baby Charlotte, who is found unharmed in her cot at the family farm.

Luke’s childhood friend, Federal Police investigator Aaron Falk, returns to Kiewarra for the funerals, the first time he has set foot in the town since leaving as a teenager in difficult circumstances. His intention is to leave again as soon as possible, but he’s persuaded to stay on by Luke’s mother Barb, who is convinced of her son’s innocence. After a visit to the Hadler farm and crime scene, Falk starts an informal investigation into the killings with Kiewarra’s recently appointed community police sergeant, Greg Raco, who feels that something about the case is off.

Where to start when singing this novel’s praises? The writing and characterisation are excellent. The reader is immediately drawn into the life of Kiewarra’s remote community, and the landscapes and searing heat are brought vividly to life. The plotting is meticulous, with Falk and Raco’s investigation providing tantalising clues as various lines of inquiry unfold. The police procedural detail is gripping, and the resolution to the case is both unexpected and completely plausible. There is also a second, parallel narrative strand – the story of why Falk and his father were forced to leave Kiewarra twenty years earlier – which is expertly woven into the main investigation. It provides a fascinating insight into teenage life in an isolated community, and, like the main narrative, shows how such communities can turn on those they deem to have transgressed social codes. Secrets and lies abound. Tension is also generated by sections in which the past and present alternate, adding layers of richness to the story.

It’s hard to believe that The Dry is Harper’s debut novel. It’s an extraordinary achievement: accomplished, hard-hitting and completely gripping. I can’t wait to see what she writes next.

You can read the first chapter of The Dry here. One extra note: I listened to the audiobook version, and hearing the story told by an Australian voice was a definite plus. Stephen Shanahan’s narration was excellent (though the Scottish accent of one of the characters needed a little work!).

Behind the Night Bazaar is the first novel in the Jayne Keeney series by Australian author Angela Savage, and was shortlisted for the Ned Kelly Best First Book Award in 2007. It’s one I’ve been meaning to read for ages and am glad I finally have, as it’s an excellent debut that vividly evokes its Thai setting. As a bonus, it’s distracted me from the cold of the British winter and triggered some happy back-packing memories from my youth.

Jayne Keeney is an Australian private investigator based in Bangkok, who is pulled into a murder investigation when visiting her good friend Didier, an HIV-outreach worker in Chiang Mai. Certain that the authorities are guilty of a cover-up, Jayne sets out to expose the truth behind the case and to right some wrongs.

Among the many things I liked about this crime novel were the depiction of Jayne as an independent woman and highly capable investigator who speaks flawless Thai (being bilingual is an essential asset for her work); the inspiration Jayne takes from crime classics such as Sherlock Holmes and Miss Marple during her investigation (even as the narrative draws on the conventions of hard-boiled crime); the wonderful evocation of place and the insights we’re given into Thai culture (oh the food!); and last but not least, the guest appearance of a diva academic…(I promise we’re not all like that).

The author also explores larger social issues, such as HIV and the sex trade (drawing on her own time in Bangkok as head of the Australian Red Cross HIV/AIDS sub-regional programme), and I was impressed by the way that these were integrated into the main narrative. Savage takes care to avoid stereotyping, providing a nuanced examination of difficult issues, such as why women might opt to become sex-workers. Notable too, are the rounded depictions of the villains in the novel, which show us the flawed logic they employ to justify their crimes.

In sum, The Night Bazaar is a highly impressive opener, and I’m very much looking forward to the next novel in the series, The Half Child.

Angela has an author/crime blog that’s a great read, and has recently posted her crime picks of the year over at Pulp Curry – including the rather intriguing Australian/Icelandic novel Burial Rites. 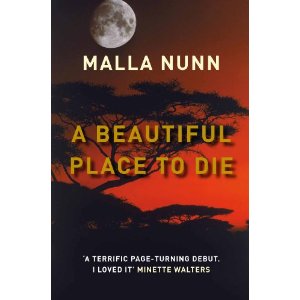 Opening sentence:  Detective Sergeant Emmanuel Cooper switched off the engine and looked out through the dirty windscreen.

I’ve been looking for a good crime novel to sink my teeth into, and this one stood out from the crowd as I was browsing online recently. A Beautiful Place to Die is the debut crime novel by Malla Nunn, an Australian-based but Swaziland-born author, and is the first of the Emmanuel Cooper series, set in 1950s apartheid South Africa. It was awarded the Australian ‘Sisters in Crime Davitt Award for Best Adult Crime Novel’ and was shortlisted for the American Edgar Awards (‘Best Novel’ category).

The book opens in September 1952 with the discovery of a murdered police captain, Willem Pretorius, in a river by the South African settlement of Jacob’s Rest, near the Mozambique border. Detective Emmanuel Cooper is called in to investigate, and soon realises that the case is extremely sensitive, as Pretorius is a well-connected Afrikaaner within the powerful National Party movement, and Security Branch investigators are poised to take political advantage by framing a black communist for the crime. It quickly becomes clear that getting to the bottom of this murder will place a number of individuals, including Cooper himself, in a great deal of danger.

For me, the great strength of this novel was the way it used the crime narrative to illustrate the socially divisive and destructive effect of the racial segregation laws, introduced by the Nationalist government from 1948 onwards. Cooper, who served in Europe during the Second World War, notes despondantly that ‘eight years after the beaches of Normandy and the ruins of Berlin, there was still talk of folk-spirit and race purity out on the African plains’. Ironically, apartheid was gearing up for four decades of oppression at practically the same time as German fascism in Europe was defeated.

The novel convincingly captures the tensions apartheid generates within Jacob’s Rest, as well the inevitable tangles that its simplistic racial categorisations bring about: the dedicated Volk ideologue who furtively thinks of himself as part-Zulu; fair-skinned children of black and white parents who ‘pass’ illegally as whites; illicit liasons between white men and black women that fall foul of the Immorality Act because no law can successfully control desire. The novel also has interesting points to make about the gendered power-dynamics of interracial relationships, and the limited options open to black women being pursued by white men.

While I felt the first half of the book was extremely well-written, with a tremendous sense of place, portions of the second half dipped substantially for me, mainly because the plot became too melodramatic for my taste. In spite of this I still find myself keen to read the second book in the series, due to the depiction of Cooper (a complex, well-drawn investigative figure negotiating a repressive regime), the novel’s successful portrayal of 1950s South Africa, and the fact that the novel lingered in my mind for many days after I’d turned the final page.

The second novel in the series, Let the Dead Lie, was published in 2011. The publisher’s synopsis is available here.