Today sees the publication of Crime Fiction in German by the University of Wales Press. For all us involved in writing and producing the book, this is a hugely exciting moment, not least because Crime Fiction in German is a genuine first: the first volume in English to give a comprehensive overview of German-language crime fiction from its origins in the early nineteenth century to the present day. And it’s World Book Day here in the UK as well – what could be finer?

To celebrate there’s a FREE introductory chapter available to all readers!

Further details, including a table of contents, are available at the University of Wales Press website. The paperback is available from Amazon here.

Now read on for details of the FREE chapter!

While Crime Fiction in German is an academic volume that hopes to be useful to scholars in the field, a key aim has been to make the book accessible to ALL readers with an interest in crime fiction. We’re aware that not everyone may be able to buy the volume (academic texts have smaller print runs and are mainly bought by university libraries, and therefore have a different pricing structure to mass-produced books). If not, one option is to ask the local library to order a copy. Another is to read on for a very special treat…

Anyone, anywhere in the world, can download Chapter One of Crime Fiction in German for FREE.

The chapter gives an overview of the volume and of the history of German-language crime fiction. It’s PACKED with criminal goodness, and thanks to the generous financial support of Swansea University, you can download from the university’s Cronfa research repository. And did I mention that it’s FREE?

Right, here we go! The link to the Crime Fiction in German Chapter One is

Enjoy and please spread the word!

It’s been a little while since I last posted, because I’m on a final push with the Crime Fiction in German volume. I’m nearly there – the entire draft’s been printed out and just needs some final checks before it goes off to the University of Wales Press. I’m obviously biased, but think it looks rather splendid. 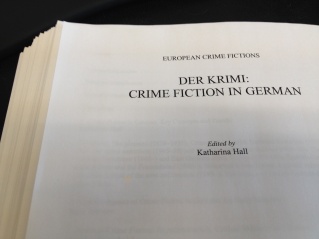 One bonus in the final phase of editing has been finding out more about the Afrika-Krimi – German-language crime fiction set in Africa – courtesy of a chapter by Julia Augart, who’s based at the University of Namibia. Namibia was a German colony between 1884 and 1915, and one novel she discusses is Bernhard Jaumann’s Steinland (Stoneland, 2012), which explores that post-colonial legacy in the context of current land reform policies. I hoovered up the novel while I was editing the chapter, and it was a fascinating read. While that one’s not translated yet, Jaumann’s 2010 novel The Hour of the Jackal is out in English (John Beaufoy Publishing): like Steinland, it features the excellent detective inspector Clemencia Garises.

Although things have been a bit hectic, I’ve managed to keep up with Broadchurch on ITV. The general reaction to this second series has been disappointment, as it’s definitely not lived up to the quality of the first. But I’m still watching, as (eye-raising legal daftness aside) I love the Hardy and Miller dynamic, and Olivia Coleman’s acting in particular. By contrast, Spiral series 5 (the one I’m not watching…) has been getting strong reviews.

Some very interesting news in – thanks to Jacky Collins – about a European crime drama called The Team, which is currently in production. Based on the work of Interpol, the drama will follow a European team as it investigates three murders, in Antwerp, Berlin and Copenhagen, and will switch between Dutch, German and Danish as the location of the action changes. It’s a product of the EBU (European Broadcasting Organisation), and is funded via the EU and eight of its member states.

And look who’s in it! I think the whole thing is a stroke of genius on the part of the EBU: the concept of a European Union is undergoing something of a battering at the moment, not least in the UK. What better way to persuade audiences of the positive benefits of European cooperation than a top-notch crime drama? Other ‘Eurocrime’ novels and series have existed before (such as Arne Dahl’s ‘Intercrime’ series), but as far as I’m aware, this is the first time that one has been instigated and funded via the EU itself. I love the deliberately multicultural and multilingual approach the makers are taking, and hope it does really well.

You can find out more about The Team here. It’s being shown in Denmark, Germany, Austria, Switzerland, Sweden and Belgium later this month. Let’s hope it makes its way here very soon.