Somehow it’s been five months since I last blogged, but thankfully I’ve still found time to read some quality crime – a very welcome oasis amidst the grind of daily life. Here’s a round-up: an eclectic assortment of international crime fiction to suit various reading moods. 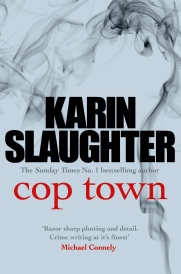 This standalone by Karin Slaughter was featured on Margot Kinberg’s excellent crime blog and immediately piqued my interest.

Atlanta, 1974: Kate Murphy’s first day as a policewoman gets off to a rough start when she runs into a wall of sexism at the precinct. On top of that, a policeman has just been killed and tensions are high. Paired with reluctant but street-savvy patrolwoman Maggie Lawson, Kate has to learn the job fast while navigating a highly dangerous case.

Cop Town provided an illuminating and enjoyable glimpse into the everyday life of pioneering policewomen. I couldn’t help but imagine the lead characters as a young Cagney & Lacey – two characters from very different backgrounds who somehow form a great team. The novel is also a good ‘sequel’ to Thomas Mullen’s Darktown, which focuses on the difficulties faced by black policemen in the Atlanta force during the late 1940s.

First line: The day before everything changed, Ante Valdemar Roos had a vision.

The Secret Life of Mr Roos is the third in Nesser’s ‘Inspector Barbarotti’ series and the most satisfying installment yet.

Middle-aged, unhappily married accountant Valdemar Roos wins the lottery and secretly buys himself a hut in the remote Swedish countryside. Anna Gambowska, a twenty-one-year-old former drug addict fleeing from a domineering partner, is forced to seek refuge there one night. Before long, a crime takes place that will transform both their lives.

This was a wonderfully absorbing 500-page read. The characterisation of the two main protagonists is excellent, as is the story of their relationship, which is told with both compassion and humour. Barbarotti only makes his entrance half-way through the novel, ensuring that Valdemar and Anna remain firmly centre stage and that we genuinely care about their fates. Scandi crime at its best. 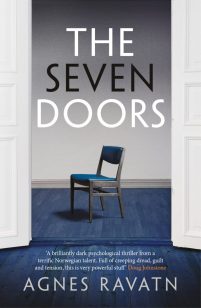 First line: Berg slinks along the walls, just as the two surveyors did the week before.

The Seven Doors is a deliciously dark psychological thriller that skewers middle-class hypocrisies and the individual’s capacity for self-deception when unpalatable truths threaten a comfortable life.

Ingeborg, the pregnant daughter of university professor Nina and consultant Mads, unwittingly sets off a chain of events when she insists on viewing the house her parents rent out as a prospective new home. Within days, tenant Mari has gone missing, and bit by bit, things spiral out of control. This is a novel about gender, class entitlement and wilful blindness, expertly spiced with some Freud and Bluebeard, and has a cracking ending – I had to re-read it twice for the sheer thrill of it!

First line: Nothing moved except the mirage.

This is a novel to save for when you are feeling emotionally robust. I think it’s one of the most devastating reading experiences I’ve ever had.

Shibli is a Palestinian writer based in Berlin, who uses elements of the crime genre to create a story with two distinct halves. The first is a crime committed in 1949 just after the War of Independence or Nakba: an Israeli officer and his platoon rape, murder and bury a young Palestinian woman in the Negev desert. The second follows a woman from present-day Ramallah who becomes obsessed with this ‘minor detail’ of history, and decides to investigate and memorialise the young woman’s death. However, doing so means travelling to areas that are strictly off-limits to her as a Palestinian, a nerve-wracking journey that subverts any conventional narrative expectations we might have.

The novel was longlisted for the 2021 International Man Booker Prize, and reminded me how crucial translation is for illuminating under-represented viewpoints and for giving a voice to authors who write in less frequently translated languages.

It’s not what you know, it’s what you can prove.

The way the drama approached its subject matter blew me away. It completely sidelined the attention-seeking murderer – to the point where his name wasn’t even mentioned – and focused instead on the investigative process that convicted him, on the relationship between lead investigator Jens Moller Jensen and Kim’s parents – and crucially on Kim and her journalism. The acting is fantastic throughout (fans of Wallander, The Killing and Borgen will recognise a number of faces), and the details of how the investigation unfolded to the point where they could successfully prosecute are riveting. A grown-up crime drama that makes conventional serial-killer narratives look tired and formulaic.

The series is still available to view on BBC 2 iPlayer.

And finally…. I’m currently reading Haruki Murakami’s 1Q84 Trilogy, translated from the Japanese by Jay Rubin and Philip Gabriel. The whole thing comes to a whopping 1318 pages, so should keep me out of mischief for a while.

The reason I include it here is because it turns out to have a strong crime element, as I discovered to my amusement about 50 pages in, when one of the lead characters was revealed not to be a smart young businesswoman after all, but something rather more murderous. You can always rely on the wildly unexpected when you read Murakami. Bananas, but in a very marvellous way.

I hope you’re all keeping well and enjoying some quality crime reading. Do let me know your top reads below. And is anyone watching Mare of Easttown with Kate Winslet? Is it as good as everyone says?!