I’m so very saddened by the death of John le Carré – a brilliant, insightful and humane writer, whose ability to capture the personal and political complexities of our time was second to none. 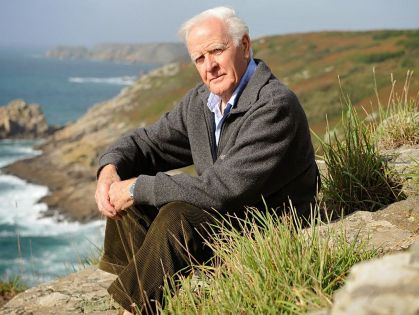 Below is a slightly edited post I first wrote eight years ago – my homage to this great writer and his works. I never met le Carré, but we did briefly have contact once, when he rode to the rescue of my beleaguered languages department after it was threatened with redundancies in 2010. He gave his help immediately and with a generosity that none of us have forgotten. During that period, he signed off a note to me with the words “All fine. Please feel free”. It sits framed on my mantlepiece, where I can look at it fondly: I reckon it’s a pretty good principle to live your life by.

Later, I was tickled to find out from Adam Sisman’s biography that we had both lived, at different times, in the same small town in our youth. I have happy memories of watching the TV series of Tinker Tailor Soldier Spy with my dad back then – we adored Alec Guinness as Smiley, and that incredibly haunting Russian doll title sequence.

Here’s my personal appreciation of John le Carré and his works, which is shaped by our mutual love of Germany and its culture. Do you have a favourite le Carré work? Please let me know if so in the comments below.

1. I love that the author and his creation George Smiley are outward-looking linguists. Le Carré studied German literature for a year at the University of Bern, and graduated with first-class honours in modern languages from Oxford. Most of his spies are linguists, and the most famous of them all, George Smiley, studied Baroque German literature and was destined for academia until the British Secret Service came knocking — in the shape of the brilliantly named ‘Overseas Committee for Academic Research’. The profession of intelligence officer offers Smiley ‘what he had once loved best in life: academic excursions into the mystery of human behaviour, disciplined by the practical application of his own deductions’ (Call for the Dead). And languages still really matter. Smiley’s ability to speak fluent German plays a vital role in Smiley’s People when he gathers intelligence in Hamburg, the city where he spent part of his boyhood, as well as a number of years ‘in the lonely terror of the spy’ during the Second World War. Le Carré says of him in an afterword that ‘Germany was his second nature, even his second soul […] He could put on her language like a uniform and speak with its boldness’. This author’s world, then, is overwhelmingly multilingual, multicultural and international. Monoglot Brits need not apply…

2. Many of le Carré’s novels brilliantly evoke Germany during the Cold War. The frequent use of a German setting was practically inevitable given le Carré’s education, his membership of the British Foreign Service in West Germany (as Second Secretary in the British Embassy in Bonn and Political Consul in Hamburg, which provided cover for his MI6 activities), and the timing of his stay between 1959 and 1964 at the height of the Cold War. Berlin was the frontline of the ideological battle between the Eastern and Western blocs, and le Carré says in an afterword to The Spy Who Came in from the Cold that ‘it was the Berlin Wall that got me going, of course’. Le Carré’s first novel, Call for the Dead, was published in 1961, the year the Wall went up, and, along with a number of his other novels, is partially set in East/West Germany (see list below). The most memorable for me are The Spy Who Came in from the Cold (1963) and Smiley’s People (1979), both of which feature dénouements involving Berlin border crossings and evoke the Cold War tensions of that time and place perfectly.

3. I admire le Carré’s sophisticated understanding of 20th-century German and European history. This is evident in his Guardian piece marking the 50th anniversary of The Spy Who Came in from the Cold, where he references the complexities of Allied intelligence operations in West Berlin, including the pragmatic but unethical protection of former Nazis, because they were viewed as valuable in the fight against communism. The difficult legacy of National Socialism in post-war Germany is most closely examined in his 1968 novel A Small Town in Germany. 4. I love le Carré’s ability to communicate complex histories to a mass readership in the form of intelligent and entertaining espionage novels. This isn’t something that many authors can do well; le Carré is one of the best.

5. All of le Carré’s novels reveal a deep engagement with moral questions — A fascination with the themes of loyalty and betrayal – in relation to both individuals and ideologies/states – is particularly visible in the Cold War ‘Karla Trilogy’ (Tinker Tailor Soldier Spy 1974; The Honourable Schoolboy 1977; Smiley’s People 1979), which in turn forms part of the eight-novel Smiley collection. What’s always had the greatest impact on me as a reader, though, is the critique of how the intelligence services (on either side of the ideological divide) are willing to sacrifice the individual for the ‘greater good’, and the recognition of the immorality of this act. Le Carré’s third and fourth novels – The Spy Who Came in from the Cold (1963) and The Looking Glass War (1965) – are extremely powerful in this respect, as they recount the tragic tales of those who become pawns in larger political chess games. Incidentally, I’ll bet my maximum bet of 10p that the figure of Avery in the latter most accurately embodies the professional and moral disillusionment that led Carré to leave the Service. The central question for this author was and continues to be: ‘how far can we go in the rightful defence of our western values, without abandoning them on the way?’ (see Guardian piece).

6. — and their characters are fantastically drawn. Aside from the masterpiece of Smiley — the dumpy, middle-aged, unassuming, sharp-as-a-tack intelligence genius — who could forget Control, Connie Sachs, Toby Esterhase, Peter Guillam, Ricky Tarr, Jerry Westerby, Bill Haydon and Jim Prideaux? All are so beautifully depicted that you feel they are living, breathing people.

7. You won’t find more perceptive writing anywhere. In German one would say that le Carré is ‘wach’: he is awake. He really SEES the world around him and has a deep understanding of how its political and power structures work, and how individuals get tangled up in them.

8. Le Carré’s works have given us wonderful TV and film adaptations, starring great actors such as Alec Guinness, Richard Burton, Rachel Weisz and Gary Oldman. My favourites are probably still the two Guinness ‘Smiley’ TV series, but I do have a soft spot for the Tinker Tailor film, which was very stylishly done and featured a stellar cast including Kathy Burke, Benedict Cumberbatch and Colin Firth.

Alec Guinness as Smiley, retrieving a clue in Smiley’s People (1982) The man sees everything….

9. The quality of le Carré’s work is consistently outstanding — the plotting, the characterisation and the settings are all sublime. One of my own later favourites is 2001’s The Constant Gardener – a brilliant exploration of pharmaceutical corruption in the developing world. In his review of 2013’s A Delicate Truth, Mark Lawson wrote that ‘no other writer has charted – pitilessly for politicians but thrillingly for readers – the public and secret histories of his times, from the second world war to the war on terror’. The sheer range of his writing is breathtaking — and it was all impeccably researched.

10. Last but not least, le Carré was a true friend of languages, and was extremely generous in using his influence to promote language learning in the UK. He was deservedly awarded the Goethe Medal in 2011 for ‘outstanding service for the German language and international cultural dialogue’.

I’ll be raising a posh glass of red to his memory tonight.

Here’s a list of Le Carré novels that reference the German-speaking world/history: