Trapped! The first two episodes of this Icelandic crime drama’s highly anticipated second season aired last night on BBC 4. It’s now three years after the events of season 1, and police chief Andri Olafsson is living in Reykjavík. But when a politician is brutally attacked outside parliament by her own brother, Andri is forced to head back north to Seyðisfjörður to unravel a tangle of familial and social conflicts. Locals are up in arms about a new aluminium plant and its effect on the community, and on top of all that, Andri has to deal with his estranged teenage daughter. Brooding landscapes, Icelandic jumpers, and a hefty dollop of the ancient sagas create a compelling mix. And it’s great to see Andri, Hinrika and Ásgeir back together as a team. If you have access to BBC iPlayer, you can catch up there.

Here’s a trailer to whet your appetite:

Which leads me on to… 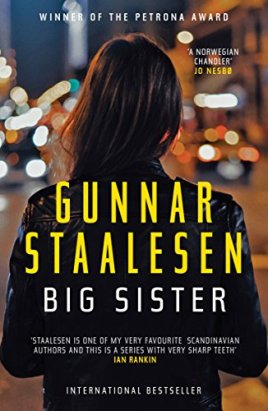 First line: I have never believed in ghosts.

This is the fifth of Gunnar Staalesen’s ‘Varg Veum’ detective novels to be published in the UK by Orenda Books, but it’s actually a pretty good place to start if you’re new to the series, as we’re given some interesting background to Veum’s own family.

The novel opens with the private eye receiving a surprise visit from a woman. Norma Bakkevik comes to him about a missing person’s case – so far, so conventional – but then reveals that she is Veum’s older half-sister, the daughter of his mother. The novel skilfully interweaves these two narrative strands, following Veum’s investigations into Norma’s goddaughter’s disappearance and his mother’s secret past. As ever, Staalesen treats us to a top-notch read, mainly set in Bergen on Norway’s southwest coast.

Staalesen won the 2017 Petrona Award for Where Roses Never Die. He’s up for the award again this year with Big Sister – can he make it a double?

Incidentally, I’m willing to bet 10p that the novel’s title was inspired by Chandler’s 1949 The Little Sister.

Which leads me to another big and little sister…

First line: Ayoola summons me with these words – Korede, I killed him.

I gobbled up this wholly original Nigerian crime novel in one sitting. Korede is a nurse: she is plain, respectable, and leads a neat and ordered life. Or rather, she would do if it weren’t for her volatile, beautiful younger sister, whose boyfriends seem to have a habit of winding up dead, and who then expects big sis to sort everything out. I won’t give too much more away, but suffice to say this is an arresting read, which fearlessly deploys the darkest of humour to tell its story. The question at the heart of the novel is: how far would you go to protect a family member whose actions you know are criminal? It’s all very nicely done, and manages to avoid an overly pat denouement.

Both the subject matter and tone of My Sister reminded me of Austrian author Bernhard Aichner’s Woman of the Dead, another wonderfully original novel featuring an unrepentant murderess…

You can read a very informative interview with Braithwaite here.