The German and French literary worlds lost one of their most talented, versatile and beloved translators last month. Anthea Bell died on 18 October at the age of 82, and the number of obituaries and articles honouring her achievements – from The Guardian to The New York Times – testify to the stature and range of her output.

If you read Asterix in English as a child, as I did, then you had the luck of being introduced to Anthea’s skills early on. Who could ever forget her delightfully inventive translations of assorted villagers’ names – Getafix the potion-cooking druid, Cacofonix the tone-deaf bard, Vitalstatistix the generously proportioned chief, and of course Dogmatix, Asterix’s little sidekick?

And there was pretty much nothing that Anthea couldn’t or didn’t translate, from the luminaries of German literature and thought – Sigmund Freud, Franz Kafka, Stephan Zweig, W. G. Sebald, Julia Franck, Saša Stanišic – to children’s literature – Cornelia Funke and Erich Kästner – to a surprising amount of crime fiction. 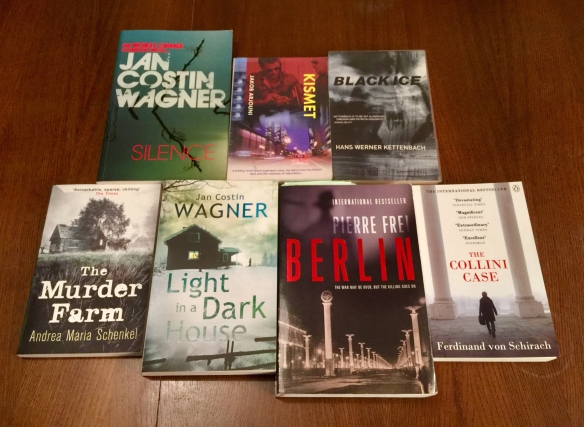 German crime novels from my bookshelf, translated by Anthea Bell

Here’s a list of all the crime novels Anthea Bell translated (I think…!) 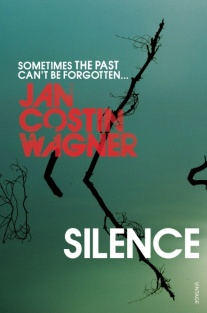 The fact that Anthea was such a prolific translator of crime fiction isn’t really mentioned in her obituaries, and that’s a shame. Translating crime fiction requires a very special set of skills – you need an eagle-eye for plot shifts, for nuances of characterization, tone and pace, and for red herrings and clues that depend on precisely calibrated wording. And of course, as one of the bestselling genres, crime fiction reaches a mass audience, making it the perfect vehicle for getting German, Austrian and Swiss literature into the hands of eager crime fiction fans in the English-speaking world … and surreptitiously introducing them to multiple facets of German history, politics and society. Anthea played a huge role in making that kind of cultural exchange happen through the hundreds of the works she translated in her long career.

The loveliest thing is that Anthea was a genuine crime fiction aficionado. I had the good fortune of appearing with her on a Waterstones Piccadilly panel on German crime back in 2015, along with Barry Forshaw (our chair), Charlotte Ryland from New Books in German, and authors Sascha Arango and Bernhard Aichner. Aichner’s novel Woman of the Dead had just been translated by Anthea, and she gleefully recounted how much she had enjoyed translating the main character – the charming yet murderous anti-heroine Brünhilde Blum. Anthea turned out to be very knowledgeable about the early history of German-language crime, and put me onto a new source which I then included in Crime Fiction in German. She also took the time to tell me that she’d read and enjoyed this blog, which I thought was exceedingly generous and kind.

Later, without her knowing it, she became my crime translation mentor, when I was asked to translate a short story from Ferdinand von Schirach’s Strafe / Punishment for a publisher. His works always make copious reference to the German legal system, legal procedure and German law, and Anthea’s prior translation of courtroom drama The Collini Case was a hugely helpful and reassuring guide as I worked to get those details right. 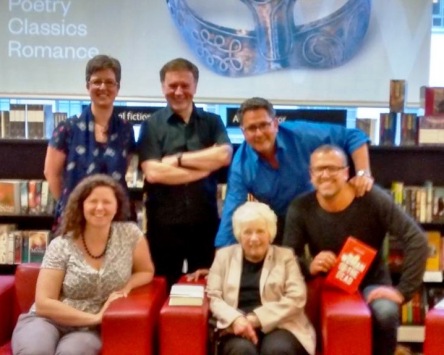 A bit blurry, but here we all are after the 2015 Waterstones Piccadilly event. Anthea is seated in the centre.

Glancing through the list of titles above, I see there are a few I haven’t yet read. I’m intrigued by The Dark Side of Love (set in Syria) and by the sheep detectives of Three Bags Full – and look forward to enjoying Anthea’s talents and skills once more. 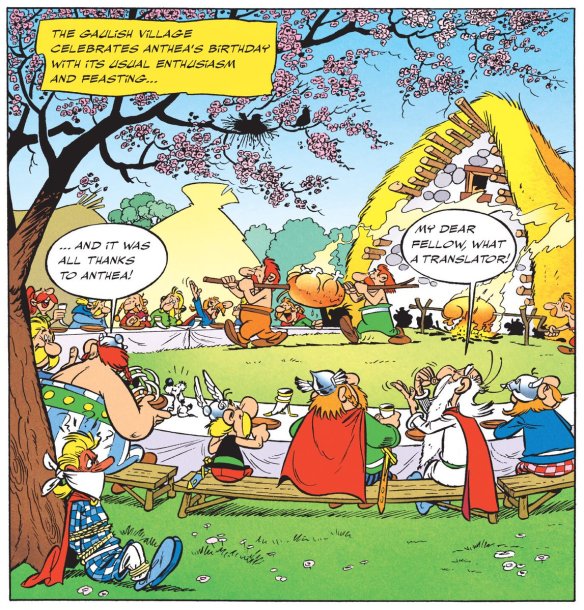 My work recently has involved lots of screen hours and acres of text, so when I saw that Posy Simmonds’ new graphic novel Cassandra Darke was out, and that it had a distinctly criminal slant, I knew instantly what my next read would be. As expected, it’s been a thorough delight. 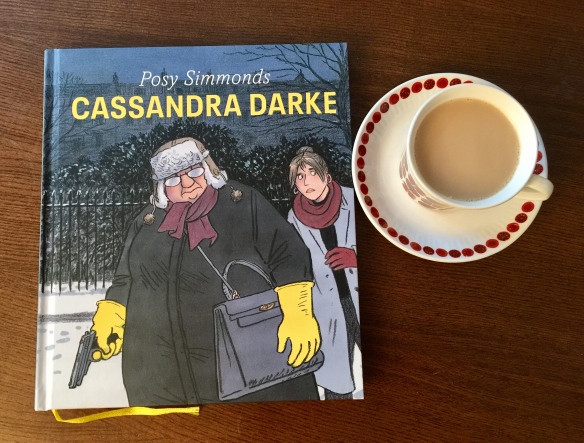 Opening line: ‘Last December – the 21st to be precise, and not so long before they came to arrest me – I remember buying macaroons in Burlington Arcade’.

The first thing to say about this book is that it’s beautiful. Simmonds’ artwork, as ever, is exquisite, and is presented in hardback on high-quality paper, with gorgeous design touches like a yellow ribbon bookmark and yellow flyleaves, which match the yellow title and Cassandra’s Marigolds on the front cover. Just having the book in your hands is an aesthetic pleasure.

Simmonds is known for taking literary classics as a point of departure – for example, 2007’s Tamara Drewe was a contemporary reworking of Thomas Hardy’s Far from the Madding Crowd. The inspiration for Cassandra Darke is Charles Dickens’ A Christmas Carol, although elements from the original story (such as the apparitions) are woven in with the lightest of touches.

The most obvious similarity to Dickens’ story is the Scrooge-like characterisation of Cassandra, who’s a well-heeled art dealer living in a £7 million house in Chelsea, London. Completely self-sufficient, she lives life very much on her own terms, which is laudable in some respects, but not in others, as she’s often inconsiderate, abrasive and rude. Like Scrooge, she’s forced to go on a journey of personal discovery, partly because she overreaches herself in the art world, and partly because she gets drawn into a messy and potentially criminal situation by her lodger Nicki, the daughter of Cassandra’s ex-husband. In fact, the whole novel is stuffed with crimes – an unexplained body and art fraud are just the beginning – with Cassandra taking on the mantle of detective at one point. 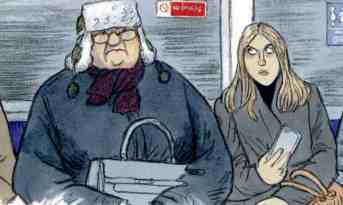 I loved Cassandra’s distinctive narrative voice, but the cast of characters around her, from lodger Nicki and ex-husband Freddie to Corker the dog, are all beautifully observed. Simmonds’ has a gift for capturing the cadences of dialogue, and of course the way in which she draws her characters and their settings tells us a huge amount about them as well. She also skilfully incorporates some trenchant social commentary on the wealth divide in London, on urban loneliness, and on various aspects of gender, class and violence. It’s only when you come away from the novel and start to mull on its themes that you realise how much the author has packed in.

Having read Cassandra Darke once – primarily to get to the bottom of the crimes – I’m now keen to read it again. The story is told in three sections (the middle one a flashback), and I’d like to explore that narrative structure a bit more. But mainly, I’d like to spend some time just looking at the artwork and admiring how Simmonds melds images and words. This is a book that will keep on giving.

Feast your eyes on a lengthy extract from the opening of Cassandra Darke over at The Guardian.

And you can read an interview with Posy Simmonds here: ‘Women in books aren’t allowed to be total rotters’