As ever, CrimeFest in Bristol was a four day extravaganza of goodness. Here are a few highlights.

First ever Krimi panel at CrimeFest

The four German authors on the Krimi panel – Mario Giordano, Merle Kröger, Volker Kutscher and Melanie Raabe – had never met before, but you’d never have known given the lovely dynamic between them. Each brought a very different kind of crime novel to the event, which made for fascinating and varied discussion. 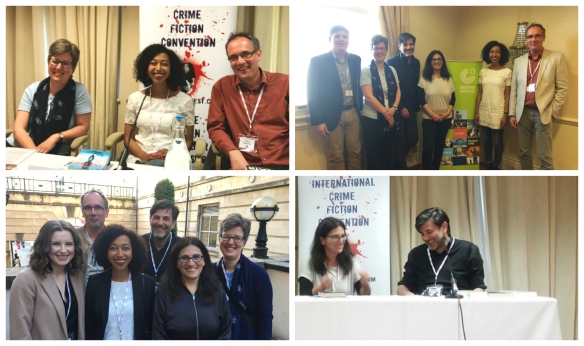 Mario is the author of a comic crime novel with a serious edge – Auntie Poldi and the Sicilian Lions – which shows a recently widowed Aunt Poldi arriving in Sicily with the intention of drinking herself to death. Instead, she promptly becomes involved in a murder case and meets a handsome Sicilian police detective… Merle’s novel Collision is perhaps best described as a maritime thriller, and shows four vessels – a cruise liner, a refugee dingy, an Irish freighter and a Spanish rescue ship – crossing paths in the middle of the Mediterranean. Inspired by a short film shot by a cruise ship passenger, it has serious points to make about the refugee crisis and the negative effects of capitalism.

Volker writes historical crime novels – six in the ‘Gereon Rath’ or ‘Babylon Berlin’ series to date – which are set in Weimar Berlin and investigate (in part) the ways the Nazis came to power. The first novel is currently being adapted as a sixteen-part TV series by ARD/Sky, directed by Tom Tykwer, and will air this autumn. And Melanie presented her clever psychological thriller The Trap, which has done incredibly well for a debut, and is in the process of being made into a film by TriStar pictures. It features an intriguing protagonist – traumatised writer Linda Conrads – and explores the themes of grief, loss, isolation, madness and justice. 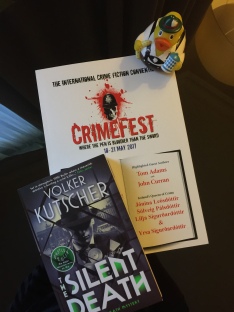 Erich the Bavarian duck was in attendance

Audience questions led to discussion of how the German authors work with their translators – Imogen Taylor, Niall Sellar, John Brownjohn, and Rachel Hildebrandt/Alexandra Roesch – and there was lavish praise for the very skilled work that they do. The authors also recommended some of their favourite Krimi writers, including Doris Gercke (‘Bella Block’ series, set in Hamburg), Jan Costin Wagner (‘Kimmo Joentaa’ series, set in Finland), Bernhard Aichner (Woman of the Dead, set in Austria) and Simone Buchholz (Blue Night, currently being translated by Rachel Ward for Orenda Books, set in Hamburg).

Thanks once again to our sponsors for making this very special event happen! 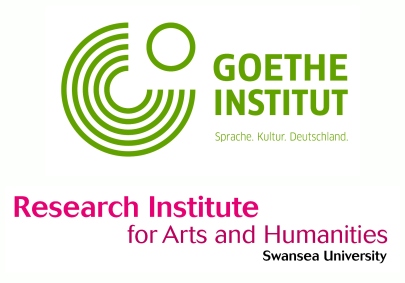 Saturday night at CrimeFest is always a special occasion for the Petrona team, as it’s when we announce the winner of the Petrona Award. This year the award went to Norwegian author Gunnar Staalesen for his crime novel Where Roses Never Die, translated by Don Bartlett and published by Orenda Books. 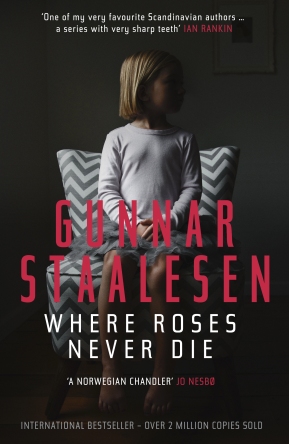 Here’s what we said about Where Roses Never Die when we announced the shortlist: ‘Grieving private detective Varg Veum is pushed to his limits when he takes on a cold case involving the disappearance of a small girl in 1977. As the legal expiry date for the crime draws near, Veum’s investigation uncovers intriguing suburban secrets. In what may well be the most accomplished novel in a remarkable series, the author continues to work in a traditional US-style genre, but with abrasive Scandi-crime social commentary very much in evidence.’

Both Gunnar and Don Bartlett were at CrimeFest to accept and enjoy the award, and Gunnar paid touching tribute to his ‘perfect translator’ in his acceptance speech. Congratulations must also go to the other shortlisted authors for their wonderful crime novels – gems one and all. Sincere thanks as well to our Petrona Award sponsor, David Hicks, for his generous support.

Other highlights for me included the American Noir panel, with C.J. Box (‘Joe Pickett’ series) and Bill Beverly (whose exceptional debut Dodgers has raked in prize after prize), and the Icelandic Queens of Crime panel, featuring Jónína Leósdóttir, Solveig Pálsdóttir, Lilja Sigurðardóttir and Yrsa Sigurðardóttir. All four talked very eloquently about their work and Iceland, and also made me want to invite them to a riotous and extremely fun dinner party.

A big thank you to the CrimeFest organisers for another cracker of a year. 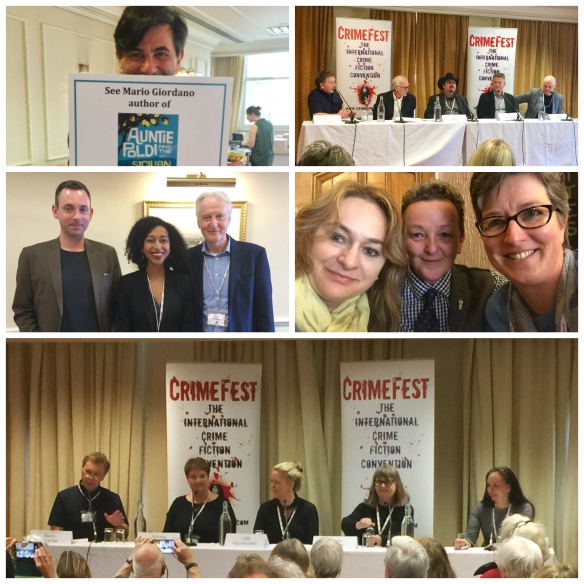 Clockwise from top left: Mario Giordano; Barry Forshaw with the American Noir panellists; tea with Ewa and Jacky; Barry moderating the Icelandic Queens of Crime; last but not least – Ragnar Jonasson, Melanie Raabe and Hugh Fraser after their ‘Misfits and Miscreants’ panel.