Writing second novels is often difficult, but Sarah Ward makes it look easy. A Deadly Thaw, which was published by Faber & Faber on 1. September, is the sequel to In Bitter Chill, and sees Detective Inspector Francis Sadler and his team investigating another disturbing and fascinating case… 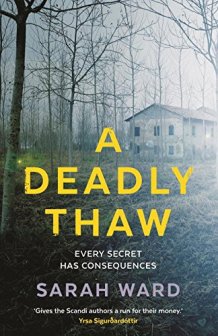 Here’s the cover blurb to whet your appetite:

‘2004: In Bampton, Derbyshire, Lena Fisher is arrested for suffocating her husband, Andrew.

Spring 2016: A year after Lena’s release from prison, Andrew is found murdered in a disused mortuary.

Who was the man Lena killed twelve years ago and why did she lie about his identity? When Lena disappears, her sister Kat follows a trail of clues….’ 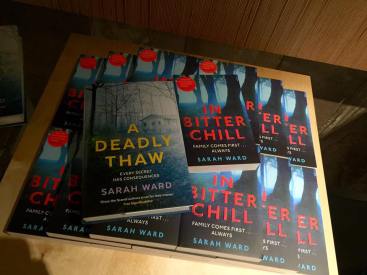 I was lucky enough to receive an advance copy of A Deadly Thaw, and had a very similar reading experience to In Bitter Chill:  I found the novel nearly impossible to put down and devoured the whole thing in two sittings. I was also struck again by the distinctiveness of Sarah’s authorial voice and her approach to crime writing. I’ve tried to dissect this a little and think it’s the following elements, in combination, that set her works apart for me:

A police procedural with a twist. While strong elements of the police procedural are visible in A Deadly Thaw, a significant portion of the narrative explores events from the perspective of individuals caught up in the case – especially sisters Lena and Kat. I really like this varied focus and the 360-degree view of the case it provides.

Strong, complex female characters. Lena (recently released from prison) and Kat (a therapist) are both extremely well drawn. Like In Bitter Chill’s Rachel, they are complicated individuals shaped by past experiences, and (like most of us) are sometimes flawed and make mistakes. I find myself liking these characters a lot, even when they don’t behave in an obviously likeable way. Policewoman Connie Childs is also given further depth and it’ll be interesting to see where her story goes.

A truly beguiling narrative. I think I’ve figured out why Sarah’s books are so hard to put down: it’s a combination of relatively short chapters with tantalising endings (hat-tip to Dickens) and alternating narrative strands that make the reader desperate to know more. At the same time, A Deadly Thaw is so much more than a simple page-turner. The novel explores substantial themes, such as gender, power and cultures of policing. It’s a stylishly plotted crime novel that’s gripping and thought-provoking in equal measure, and I’m already looking forward to number 3. 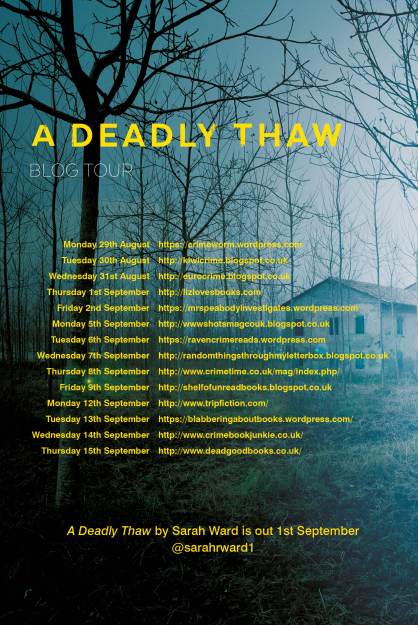