I’m just back from this year’s CrimeFest, which was particularly special for a number of reasons. This is the first of two posts on the event, and focuses on Lee Child’s interview with the legendary Swedish crime writer Maj Sjöwall. 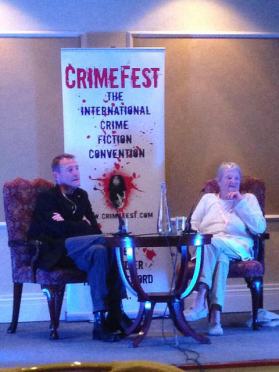 Maj Sjöwall and Lee Child at CrimeFest, Saturday 16 May (with thanks to the unknown photographer!)

Sjöwall, co-author of the highly influential ‘Martin Beck’ series with her husband Per Wahlöö, was the festival’s guest of honour. The almost mythical position she holds as the ‘godmother of Scandinavian crime’ was illustrated by the standing ovation she received on entering the room with Lee Child. What we heard from her in the course of the conversation was wide-ranging and fascinating:

The ten novels in the series also match the number of letters in Martin Beck’s name.

The Sjöwall interview was sponsored by British Institute for Literary Translation, which is very fitting: we would never have been able to read the Beck series without the services of marvellous translators like Lois Roth, Joan Tate, Alan Blair, Thomas Teal and Paul Britten Austin. Huge thanks to them! Here’s a list of the ‘Martin Beck’ novels and a few interesting links: 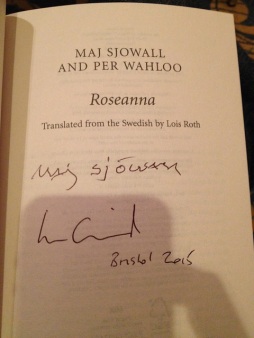 Coming up in the next CrimeFest post: The 2015 Petrona Award, Euro Noir and other international delights.