Hot off the presses from Iceland Noir! The winner of the inaugural Icepick Award, given to the best crime novel translated into Icelandic in 2014, is… 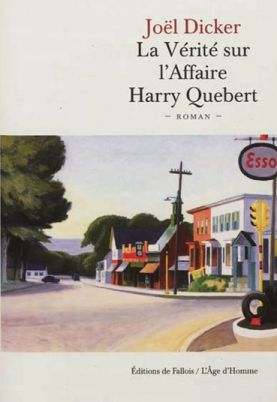 This novel is a publishing phenomenon – here’s the blurb from Penguin, which has certainly made me want to read the book:

>> The Truth About the Harry Quebert Affair is a fast-paced, tightly plotted, cinematic literary thriller, and an ingenious book within a book, by a dazzling young writer.

August 30, 1975: the day fifteen-year-old Nola Kellergan is glimpsed fleeing through the woods, never to be heard from again; the day Somerset, New Hampshire, lost its innocence. Thirty-three years later, Marcus Goldman, a successful young novelist, visits Somerset to see his mentor, Harry Quebert, one of the country’s most respected writers, and to find a cure for his writer’s block as his publisher’s deadline looms. But Marcus’s plans are violently upended when Harry is suddenly and sensationally implicated in the cold-case murder of Nola Kellergan—with whom he admits he had an affair. As the national media convicts Harry, Marcus launches his own investigation, following a trail of clues through his mentor’s books, the backwoods and isolated beaches of New Hampshire, and the hidden history of Somerset’s citizens and the man they hold most dear. To save Harry, his own writing career, and eventually even himself, Marcus must answer three questions, all of which are mysteriously connected: Who killed Nola Kellergan? What happened one misty morning in Somerset in the summer of 1975? And how do you write a book to save someone’s life?<<

The Icepick Award is judged both on the quality of the original work and its translation, acknowledging the vital role of the translator in allowing crime fiction to travel beyond national and linguistic boundaries to the ever grateful reader. The process of translating (which of course involves not just linguistic but detailed cultural knowledge) is often invisible, so it’s very welcome to see it being celebrated by the award.

The shortlist for the 2014 Icepick Award, with novels from America, Finland, Norway, Switzerland and Sweden, was as follows: