So I’ve finally read Arnaldur Indriðason’s Strange Shores (Harvill Secker), possibly the last novel in the Inspector Erlendur series, in which our favourite Icelandic detective heads back to his abandoned childhood home to face the trauma that has shaped his life – the disappearance of his little brother Bergur in a snowstorm when he was eight years old. While there, Erlendur also starts to dig into another unresolved story: that of Matthildur, a young wife who set off across the frozen fjords one day in 1942 and was never heard of again. The two cases are entwined throughout this absorbing narrative, and cuminate in a powerful and and thoroughly moving ending. 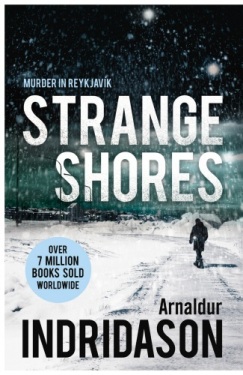 What a fine series this is: while consistently delivering satisfying police procedurals, Indriðason has provided his readers with wonderfully realised investigative figures, and with an insightful portrait of a rapidly changing Iceland (and all the good and bad such transformation entails). He also very effectively explores profound themes such as grief and loss. On re-reading my earlier review of The Draining Lake I found I had written that Indriðason’s sensitive treatment of ‘the missing’ – and of the impact of losing someone without knowing their final fate – lifted the novel above many others in the genre. The same remains true of Strange Shores.

If you’d like to know more about the novel, I recommend heading over to Raven Crime Reads, where you’ll find an excellent review. But if you’ve not yet read all the others in the series, it might be best to do so first…

Those with Erlendur withdrawal symptoms will be glad to know that Indriðason has written a prequel set in 1974 entitled Reykjavikurnaetur (Reykjavik Nights), which was published in Iceland last year. Hopefully it will be translated into English soon. Indriðason’s latest novel is called Skuggasund (Shadow Channel), and won this year’s Spanish RBA crime fiction prize. Many thanks to Quentin Bates, author of the marvellous Gunna crime series, for passing on this cheering information.

And speaking of Arnaldur and Quentin… This week sees a very special event taking place in Reykjavik for the first time – the crime convention ICELAND NOIR – which both writers will be attending, as well as a host of other Icelandic, Scandi and British authors. It looks like it’s going to be an absolutely fantastic few days, and I am deeply, deeply jealous of all who will be there. Please tweet and blog LOTS so we can take part vicariously. 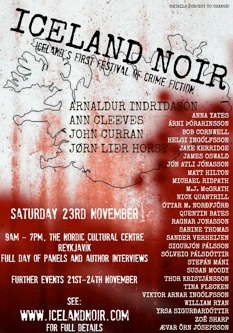