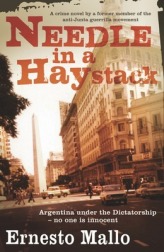 Opening sentence: Some days the side of the bed is like the edge of an enormous abyss.

This is a hard-hitting crime novel, set against the backdrop of Junta-controlled Argentina in the late 1970s, where power lies primarily in the hands of the military, and ‘disappearances’ of young political activists – supposed ‘subversives’ – are common. Such extra-judicial detentions and executions are typically not questioned by the police (the very body that should be protecting the nation’s citizenry), as doing so is perceived as a pointless exercise that would have extremely negative consequences for the individual.

Superintendent Lascano is a recently bereaved detective (see also Kimmo Joentaa), struggling to maintain his integrity in this morally bankrupt society. In the opening chapter, we see him leaving the house at the beginning of the day, trying to ignore the presumably common sights of bus passengers being searched, and a boy and a girl being driven away in a convoy of military trucks. The girl makes desperate eye-contact with Lascano ‘and then she is swallowed up by the fog’ (8). When Lascano is directed to investigate a report of two bodies dumped by the riverside, he finds that there are now three dead lying there. Unable to investigate the first two, who are clearly the victims of the death squads, he is drawn into investigating the third, and soon finds himself in danger as he treads on some highly-placed military toes.

In the process of following Lascano’s investigations, the reader is presented with a finely-drawn portrait of a corrupt Argentina and its ‘Dirty War’. The narrative is told from a number of viewpoints, giving us multiple perspectives of life under the regime, from a member of a guerrilla cell opposing the Junta (Eva), to the honest cop (Lascano and his friend Fuseli the pathologist), the decadent Argentinian (Amancio, Lara and Horacio), the Jewish businessman (Biterman), the right-wing major (Giribaldi) and the major’s wife (Maisabe). Maisabe is procured a baby by her husband – the newborn son of a young ‘subversive’, who has almost certainly been killed by the regime. The focus is very much on the enormous human price that the younger generation – ‘the kids’ – paid for trying to oppose the regime. The author, who is himself a former member of the anti-Junta movement, would have been the same age as these characters in the 1970s, and it’s hard not to see the novel as a lament for his lost contemporaries and their suffering.

One element I found very interesting was the way that members of the Junta were styled as National Socialists in the novel. For example, we’re told how shortly after a couple have been arrested, the military return to their flat to cart off their possessions: ‘Various conscripts come in and out carrying furniture … and they put everything in the back of a truck, supervised by an arrogant blond captain’ (113). For me, this scene immediately brought to mind the deportations of Jewish citizens in Germany, and the appropriation of their property by the Nazi state (signalled here by the presence of the ‘blond’ captain). Lascano is also Jewish, so there seems to be a fundamental opposition being posited in the novel between good versus evil along the fault-line of Jews:Nazis. The kind of right-wing equivalences being made here also reminded me of Imre Kertész’s 1977 novel Detective Story, which is set in an unspecified South American dictatorship and features a police-man whose interrogation methods are modelled on those of the Nazis. (Kertész is a Hungarian Holocaust survivor and writer who won the Nobel Prize for Literature in 2002, and the novel, which can loosely be viewed as a crime novel, is well worth a read – published in translation by Vintage in 2009).

It’s notable (and rather fascinating) that the English translation of Needle in a Haystack was funded by the ‘Sur Translation Support Program of the Ministry of Foreign Affairs, International Trade and Worship of the Argentine Republic’. This suggests that the novel is viewed as part of a national project of engaging with the crimes committed in the Argentine past. The first two novels are also being adapted for film in Argentina, which will undoubtedly help them reach a wider audience.

Needle in a Haystack is a compelling, absorbing and unsettling read. I’d recommend Mallo to anyone who likes quality crime novels that address serious political issues and the legacies of difficult historical pasts. It’s the first of a trilogy and the second, Sweet Money, is already out with Bitter Lemon Press.

Mrs. Peabody awards Needle in a Haystack an outstanding 5 stars.

Update: for a recent article on the process of bringing former members of the junta to justice for the theft of babies from female political prisoners, see here.